When we hear the word “Spain” many positive images can come to mind, for example the good climate, the incredible gastronomy (best food ever lol), the open and cheerful people... Picturing this we can say that it is a paradise for many around the world and within Spain. But perhaps it is necessary to go deeper and put into real perspective what it would be like to live in a new culture, in order to envision what it would look like to visit a country for holidays or living in it on a daily basis.
Spain, and in particular the Costa del Sol, is a destination that starts as a holiday and in most cases becomes a new place of residence for many people of different nationalities. In this letter we will share more information and real examples… maybe after reading it you will feel like wanting to live in this special land! 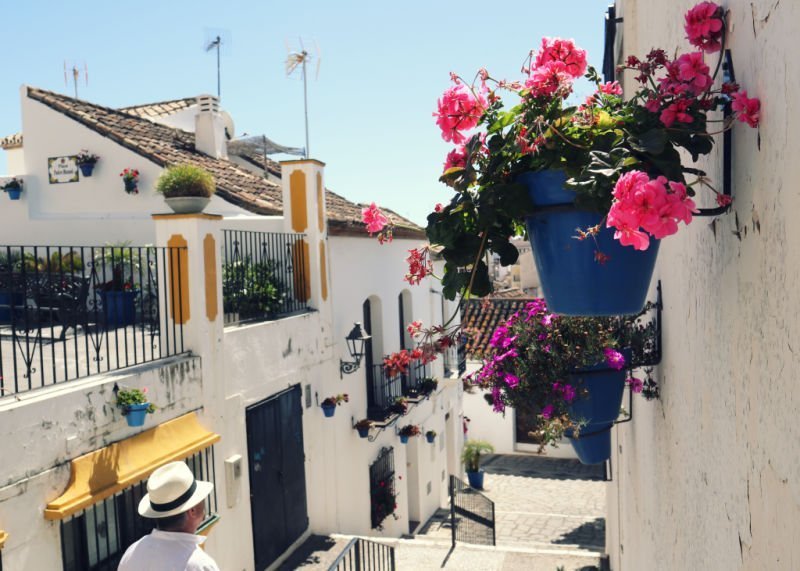 One of the first things we think about when we live in a new country is how we are going to get around. Well, Spain offers an extensive transport network for getting around the entire peninsula, even if you want to travel to the Spanish islands (the Balearic Islands or the Canary Islands). The main transportation is by road, with motorways and dual freeways that are very convenient for traveling by car. The road network is in very good condition, as it is one of the areas where the government has invested a lot of money and continues to do so. Spain is well connected by bus as well. From the main cities, you can reach practically any point in the country. In addition, the cities are not the only ones with intercity lines buses and trains, but also the more touristy towns, such as Mijas Pueblo, which run every half hour, allowing you to travel to any part of the city or areas of need or interest.
A very common service in Spain is also blablacar (better known by the locals), for people who want to travel to a place at the same time can organise to do it together. This service consists of a company/app where you can connect with private travellers and share the journey in a cheaper way but at the same time share an experience and have the opportunity to meet other people in a safe way, learning other languages (perhaps Spanish) on many occasions. As for rail transport goes, we have the famous AVE (Spanish High Speed), the longest high-speed network in Europe and one of the most extensive in the world, connecting all the capitals with Madrid, allowing you to get from Valencia to the Spanish capital in 1 hour and 45 minutes or from Madrid to Barcelona in 2 hours and a half, it is highly recommended to "fly" with this transport! The rail transport network in Spain is another indication of the progress and development of the country, which offers an unbeatable quality to connect with international airports such as Madrid Barajas.

Spain is full of "typical" surprises compared to other countries and other cultures.  One of these surprises that catches the attention of our visitors is the “window blinds”. A rare window feature is placed on the windows to keep out natural light. Some say that their use has come to us through the influence of Arab culture (which places great importance on privacy) and that they are placed on the windows to keep out visibility to the interior of the house. But the truth is that if you ask a Spaniard  (a local) what they are used for, they will tell you that it is to keep out the light and to be able to carry out another very Spanish tradition: the popular “siesta”. It is difficult to fall asleep with the light and heat of the Andalusian sun illuminating your room, so the blinds perform an excellent function in these cases. 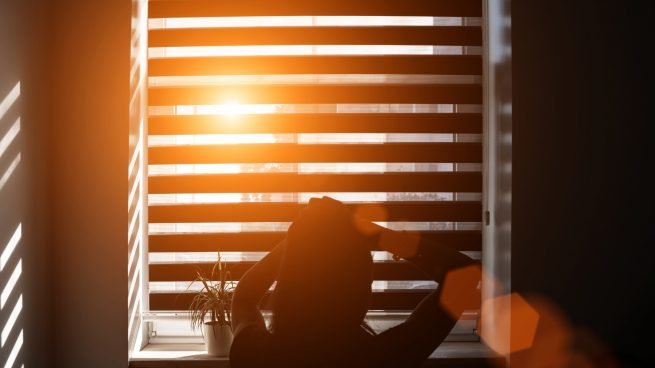 The famous siesta, so well known by our visitors from other countries, is that there is nothing better known in Spain internationally than the siesta. It has its translation in English as (nap) but by saying the word in Spanish it is perfectly understood. If you have got up early to go to work and tell one of your (non-Spanish) colleagues that you are tired, they are likely to say: "You need a nap!” as normally this is what happens in the Spanish break, very normal, very natural and traditionally. They even say it’s very good for your mental health!
It is also common to stop work for 2-3 hours in the middle of the day to eat lunch and take a siesta, so shops are often closed for a few hours. Because of this, the working day is often extended, always respecting the 8 hours labor and enlarging the work and social hours of the day, this is why we eat “so late” or hang out outside in later hours than other countries. 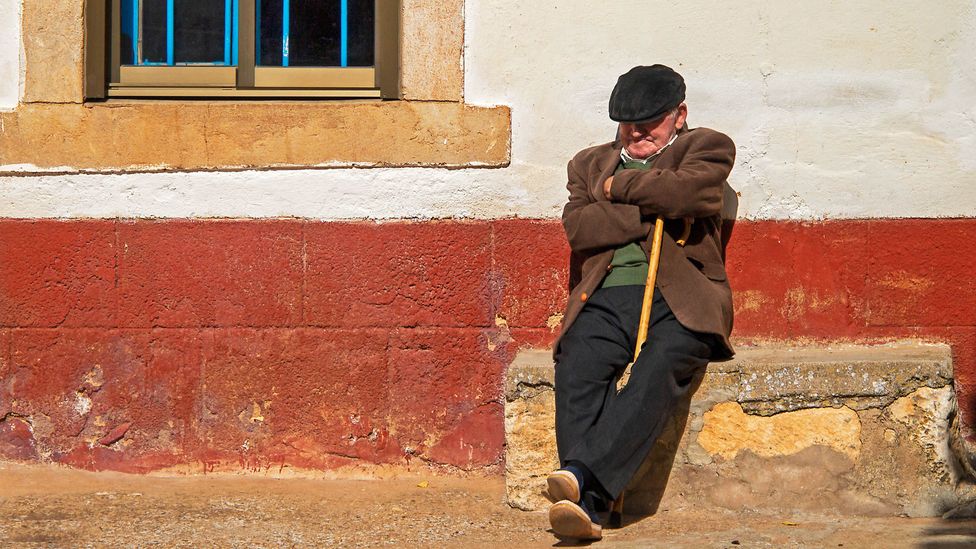 Another curiosity we would like to share with you is the Spanish tradition of the 12 grapes on New Year's Eve, one of the most interesting things in Spain, with little more than a century. Although this Christmas tradition has spread to many parts of the world, it began in Spain. Each grape represents a wish for each month of the new year. There are two theories for this tradition: the first is that at the beginning of the 20th century, in 1909 to be more precise, there was a surplus of grapes and many winegrowers began to offer them in December to sell the product as "lucky grapes" in packs of twelve grapes. Over the years this tradition has been refined and today many believe that one should make a wish for each of the months of the coming year, i.e. twelve wishes (if you ever find yourself in Spain for new years eve please try this tradition as is a lot of fun!)
Nevertheless… there is a story in the newspapers from 1882 already reporting information about this tradition, and that the grape surplus of 1909 was only a boost to a tradition that was already in the making, which leads us to the second theory: that it all started in 1882 when the bourgeois class adopted the French tradition of drinking champagne and eating grapes on New Year's Eve. This led to a revolt over class distinction by the Madrileños and a gathering to eat grapes in mockery of the aristocratic custom (quite interesting lol).
Why grapes? It is a fruit associated with good luck and prosperity. In addition to the fact that it was an affordable fruit that was often in surplus in the crops (we like this story because is a very simple and practical example of how rich and abundant Spain is). 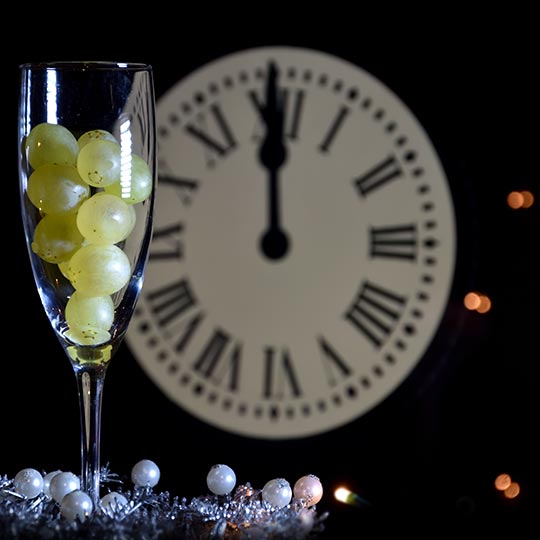 As you probably know Spain is known as one of the main producers of olive oil in the world, which is why it is a highly prized commodity in our gastronomy and is used in our dishes on a daily basis. For example, toast with olive oil is one of the quintessential breakfasts. Another thing that is very much appreciated and enjoyed is what we call "the little joys of the day", such as coffee breaks (which very cheap comparing other countries 1,20 euro in most local bars). Only in Italy, Portugal and some Latin American countries are coffee as exquisite as ours: who doesn't like to have a cup of coffee on a terrace at any time of the day enjoying the beautiful sunshine? Let’s get a coffee!
Here is a little more on our “ living schedule”. In Spain, the division of the day is also quite the thing comparing most countries. Here in Spain, people don't consider 12 o'clock in the morning "noon" as they do in the rest of the world. Here we don’t consider noon to be lunchtime, lunchtime in Spain is usually at 2-3 pm, and dinner around 9-10 pm. This only happens in Spain, as well as having 5 meals a day generally, as we are not used to having a very abundant breakfast and we have a late lunch, which is why we get hungry in the middle of the morning. The same thing happens in the afternoon with the afternoon snack. Moreover, we don't say good afternoon until we have had lunch. 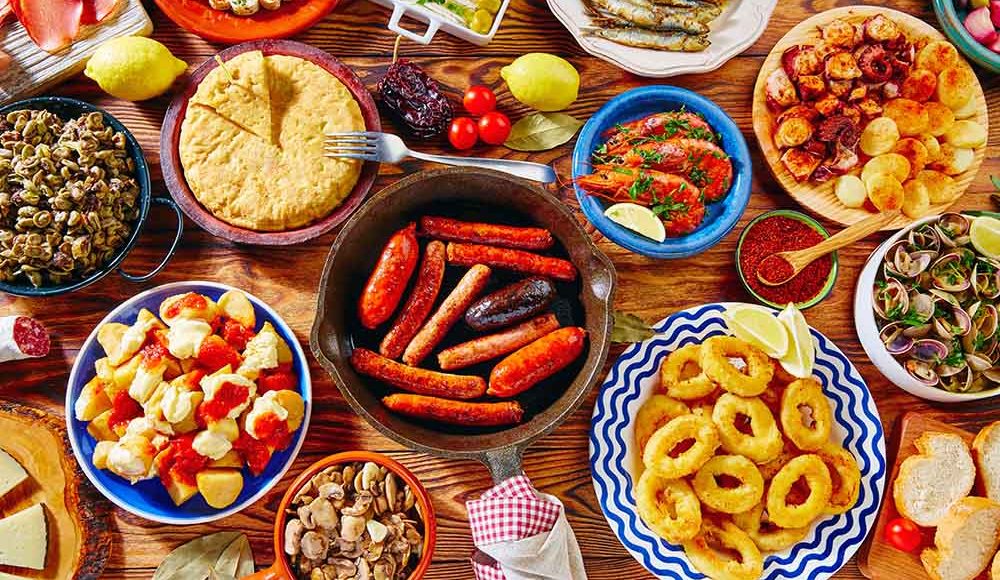 Another Spanish curiosity is that when we arrive at a meeting we have the habit of greeting everyone present with two kisses (we know this makes many of our visitors a bit uncomfortable but not to those who like to kiss lol) even if they are strangers, and even sometimes in formal settings, unlike in other countries, where we shake hands firmly or in Latin America where we usually only give a one kiss. Perhaps it is because of our way of being, that we have a sociable, friendly, and cheerful character, which says a lot about our culture, so rich in so many aspects.
We love to have lunch or dinner surrounded by others, is just part of us, is our culture. So the after-dinner (sobremesa) conversation (something very unique and original to Spain) is quite long if we are with family or friends, even in a restaurant or bar the waiters are not in a hurry to get you to pay!
Another very Spanish feature is “our fiestas”. It is very common to have fairs, festivals, and local celebrations during the year in different parts of the country where towns and cities come together with lights, music, and joy to celebrate whatever they have to celebrate, the Spaniards do not ask "what is this party" just celebrate it! 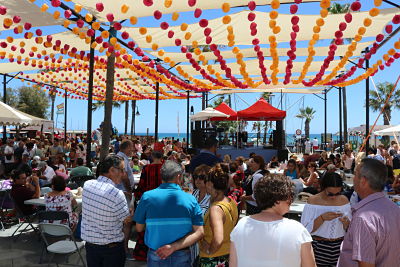 When we come to live in a different country than ours, the best bet is to learn, adapt and integrate into the culture (luckly Spain is a very easy one to integrate with). That's the beauty of traveling and getting to know the world because as we know not all countries are the same and we get to experience the difference between other cultures and ours to enrich us and make us better.
We hope you liked this letter and were able to learn a little more about our Spanish culture. We hope it will inspire you and encourage you to "try" not only a short visit but perhaps to live a longer time and experience this culture in more depth. Don't forget to keep us in your email preferences to receive the next story!
CLICK HERE TO CONTACT US PAGE
CONTACT US SEARCH PROPERTIES